Despite football around the world being on hold, players contracts continue as normal meaning that very soon there will be a load of free agents on the market that clubs can snap up.

Even with the Coronavirus pandemic, club sare starting to prepare for the future and the transfer market will be as important as ever over the next few months.

And signing players whose contracts are running out on free transfers, can often be the most prudent way and OddsMonkey has worked with transfer insider Graeme Bailey and Transfermarkt to analyse player values – if they were not available for free – and put together an XI of free agents.

Amazingly you could put together a 1 to 11, full of internationals worth a staggering £264million.

OddsMonkey spokesman Peter Watton commented: “It does show that there is value out there, in theory a team beginning from nothing could assemble a side worth in excess of a quarter of a billion pounds, which is remarkable.

“And due to the Coronavirus pandemic, many sides will be making sure their financial situation is stable, so free transfers could become a key tactic going forward.”

Playing for Nice in France, the Argentine shot-stopper is highly regarded and a market value of around £10million is accurate and could see someone getting a real bargain for someone who is only 27.

Arguably the most valuable free agent this summer, the 28-year-old Belgian is a classy right-back who has many Premier League clubs chasing him.

Perhaps one of the lesser known names, but the Argentine central defender is a big player for Italian side Atalanta – who one of the best teams in Serie A and have been making a big impact in the Champions League.

The 32-year-old has been a stalwart for Spurs for years but looks set to leave and the Belgium star will surely be a bargain signing for someone if he does leave.

Another PSG full-back and another with huge value. The French international, who has attracted interest from Arsenal, would easily be in excess of £20million on the open market on a long-term contract given his is just 27.

RYAN FRASER – WINGER – BOURNEMOUTH
At just 26, Fraser is the youngest in this XI. The Scottish international is arguably not yet at his peak and picking up a Premier League proven winger for nothing is not easy. He won’t be short of options.

No doubt who is the best player in the XI – but the 34-year-old Spanish maestro could easily be staying for longer at City, but has taken the decision to move on. A true Premier League great.

ADAM LALLANA – MIDFIELDER – LIVERPOOL
Still only the 31, the England international midfielder could be a fantastic addition for someone. Moving on because of the talent ahead of him at Anfield, he will still be hoping to show his class at this next club.

WILLIAN – WINGER – CHELSEA
The Brazilian has been brilliant for Chelsea, but looks set to move on and he has huge interest. The 31-year-old is one of the most valuable free agents set to hit the market.

Another Belgian available for nothing, although Napoli hope he stays. The 32-year-old still has one big move left in him and he could be another turning up in the Premier League next season.

EDINSON CAVANI – STRIKER – PARIS SAINT GERMAIN
The third PSG player to make out XI and nobody bigger than Edinson Cavani. A world class talent, but the 33-year-old could very well turn his back on Europe and return to his native South America. 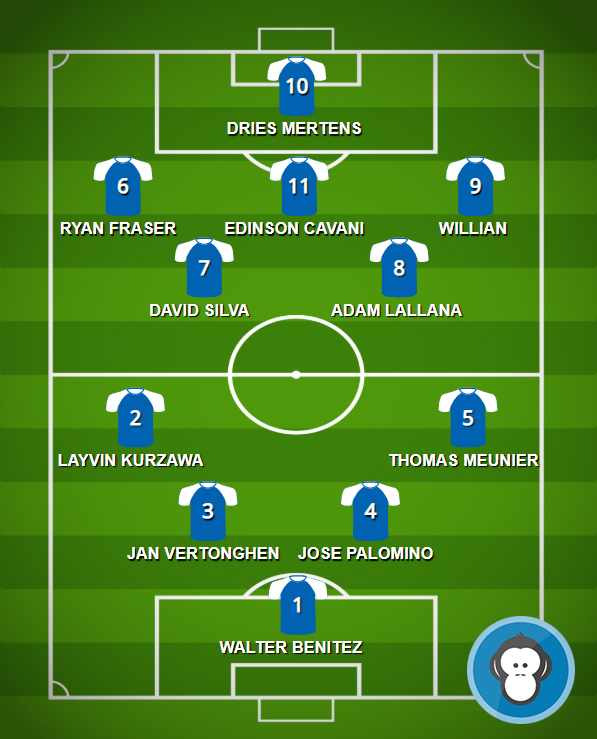 PrevPremiership set for a June return?
The Bundesliga Feeds the Appetite for Top Flight FootballNext