How do the Bankers work out at Cheltenham?

There are five odds-on favourites – known as Bankers – heading into the Cheltenham Festival, the most we have seen in five-years, so OddsMonkey has looked back on just how they fared and what the tells us for 2018.

Heading to Prestbury Park, five big fancies and five who the Bookmakers are fearing hugely.

So if we look back over the last ten years, back 2008 there was only one odds-on favourite in the shape of Gold Cup star Kauto Star, but his bid was taken down by stablemate Denman.

Into 2009 and of the three odds-on chances, only the legendary Master Minded won. 2010 and the results were not much no better for the fancied runners, with again just one winner in the shape of Cheltenham veteran Big Bucks. Big Bucks repeated that success 12-months later in 2011 as he along with the brilliant Quevega again tasted glory. 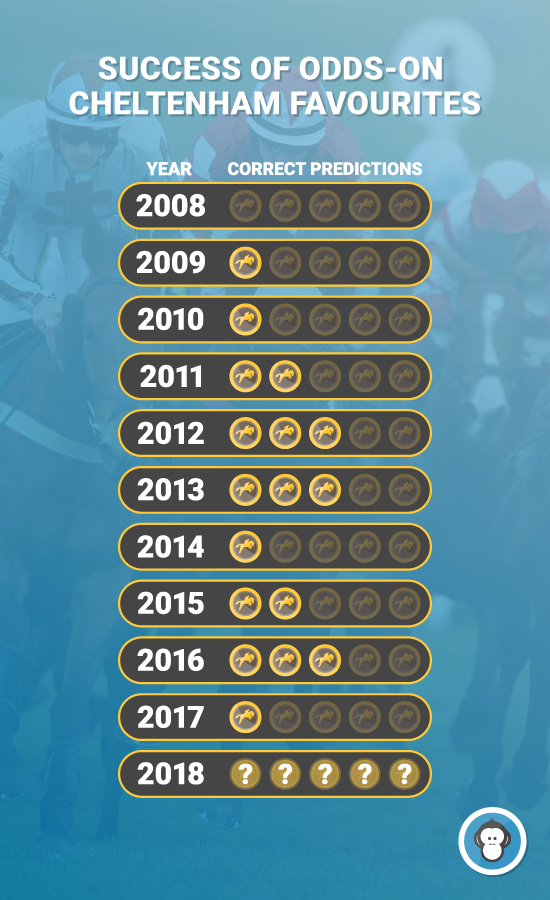 And last year, it was something of a graveyard for the big names with only Altior delivering – so now to this year, what do we think?

“As it stands we have five very good horses going to the line as favourites, we have not had so many since 2012 when there were some huge names taken down, but the majority still won,” explained OddsMonkey spokesman Peter Watton.

“Yes it is clear that it is highly unlikely that all five are going to come in – in the last decade we have never seen more than three, but the chances are is that the majority might, so it is picking out those Bankers who won’t disappoint.”