Novak Djokovic claimed his 18th Grand Slam tennis title when he beat Daniil Medvedev in the 2021 Australian Open Final. It was his ninth Australian Open win and one that put him within two Grand Slams of Federer and Nadal, who are both currently on 20 each.

Not many people would argue that it seems very likely Djokovic will go onto pass both Federer and Nadal with the greatest number of slams. Federer is approaching 40 and is unlikely to win anymore Grand Slams at this point. Nadal will probably continue to dominate the French Open for a couple more years yet but he isn’t competitive on the other surfaces.

We decided to take a look at some Grand Slam data to see who is the best of this trio and whether Djokovic is already the best. We also included some of the greats from years gone by to see how they stack up against today’s dominate trio.

We thought that awarding points to overall Grand Slam performances was the best way to decide this, so using a points system, we worked out who had achieved the most overall.

Unsurprisingly Federer came out top of this list but that wasn’t really a fair comparison. As Federer is older and played in more tournaments he had an advantage over the other players. Therefore we decided to take into account the number of tournaments played as well. We came up with the following scoring system.

This showed us that whilst Djokovic has now surpassed the achievements of Nadal and Federer, he isn’t the best of all time. That honour lies with Bjorn Borg. Whilst Borgs point score is the lowest on the table, equal that of McEnroe, Borg competed in far fewer tournaments than the rest. He retired at only 26 years of age while he was still top of his game. He was completely dominant in Slams during his career and arguably hadn’t even reached his peak.

Borgs strike rate in Slams is something other players can only dream of. Having won eleven out of the 28 Slams he entered, including 6/8 French Opens and 5/9 Wimbledons. 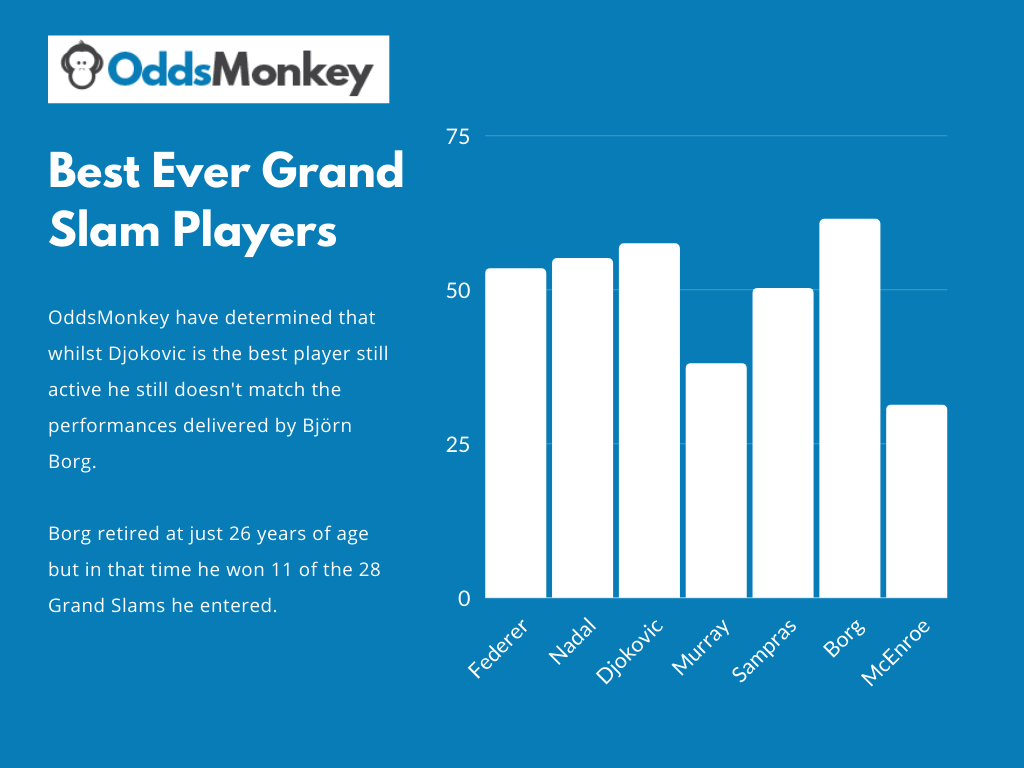 PrevWhy is Cheltenham such a Big Deal at OddsMonkey?
Female e-sports stars take home 98% less than the average elite gamerNext