Pounds to points – Dyche and Wenger producing the value

Do pounds mean points? OddsMonkey has collated the summer spending for all 20 Premier League clubs and converted that to work out how that equates to their performance in the current Premier League season.

There were varying levels of spending throughout England’s top-flight this summer, but our table of points to pounds shows us who has seen their money go that bit further.

Spending across the Premier League this summer broke the billion pound barrier but as our table shows some spent a lot more than others.

It is probably little surprise to anyone that Burnley – currently riding high at sixth – have offered the best value for money in comparison to their summer spending. The Clarets spent just over £33million and their current points total means their point per pound ratio was just over £1million, the best in the top-flight. 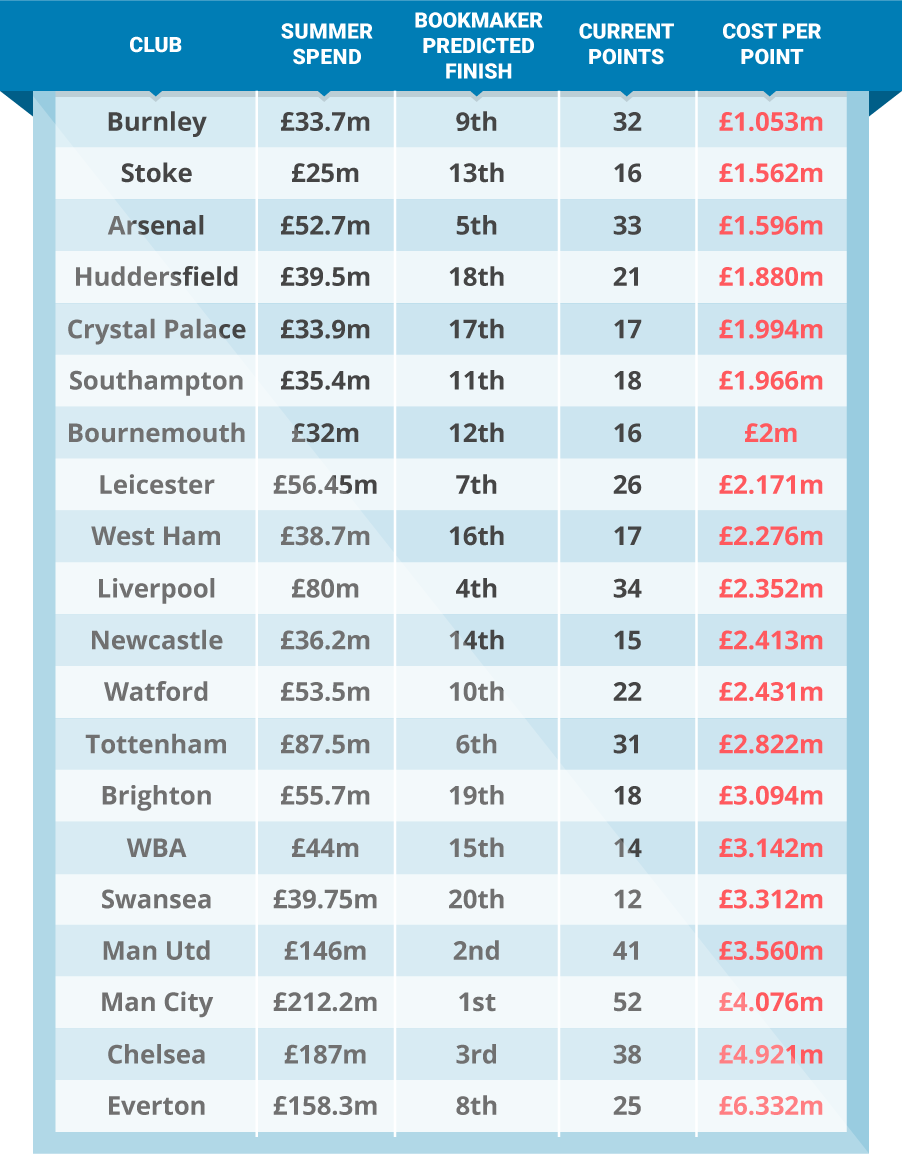 Stoke were second on £1.5million per point but then surprisingly on just after them comes Arsenal – the frugal approach from Arsene Wenger means that their spend of just over £50million – on one player in Alexandre Lacazette – means they have spent £1.59million per point

At the other end and Everton’s costly summer of spending has seen their value for money not stack up, although their improved form under Sam Allardyce will surely see their current figure of £6.3million per point improve massively.

Current leaders Man City were the biggest spenders in the summer, at other £200million – but such has been their excellent start, they are just over £4million a point – which is better than Chelsea who are nearly on £5million a point.

OddsMonkey spokesman Peter Watton commented: “It was the biggest summer in terms of spending for any league in history, so we thought it would be interesting to see how that would be working out in relation to a team’s current performance, and it was little surprise to see Burnley topping the chart – but we were shocked by how well Arsenal, and perhaps even Liverpool too, who ranked in the top-ten for value despite their £80million outlay.

“At the other end and it is amazing that Man City are not bottom considering their huge spending spree, but that goes to show just how well they have done thus far. Everton are well adrift at the bottom in terms of value, but if that form continues then – like with the Premier League itself – they should soon be shooting up this table too.”