Revealed: How long it would take the England team to earn the World Cup prize money themselves

The World Cup is now in full swing with 32 teams battling for the lucrative World Cup title – and £28 million prize money.

FIFA will pay out £301,802,000 in prize fund money for all 32 teams competing in the World Cup tournament this year. The winning team will receive £28 million of the total prize fund, while 2nd 3rd and 4th place teams will receive £21 million, £18 million and £16 million respectively.

With the winning World Cup bonus working out to £1.2 million for each player, matched betting specialists OddsMonkey, have compared England squad’s weekly wages to calculate how long it would take each man in the squad to earn their share of the prize money. 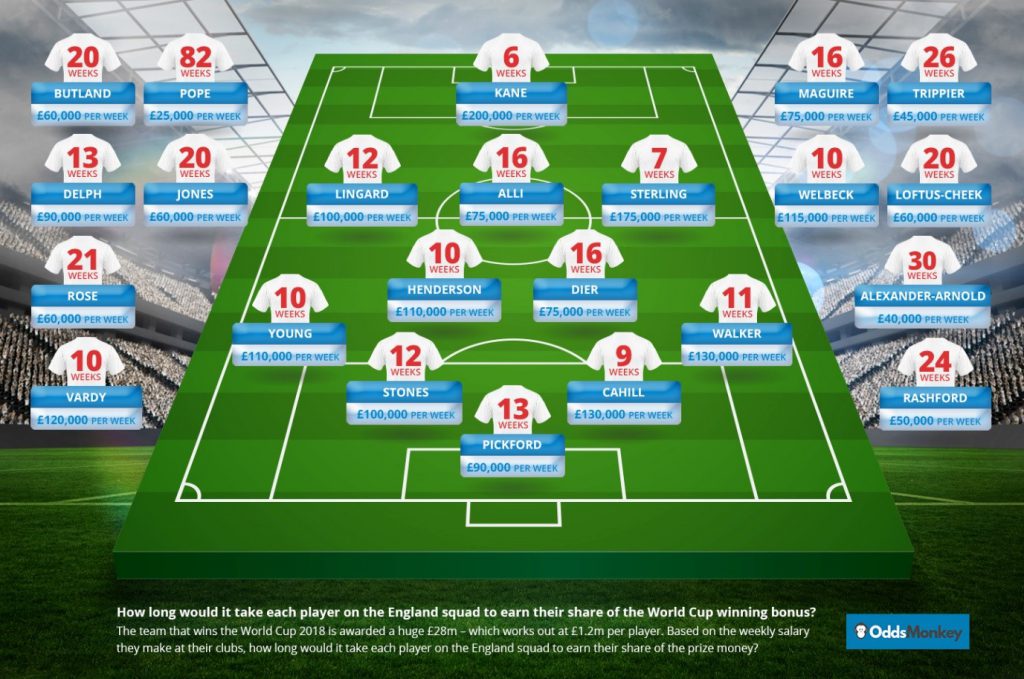 England captain Harry Kane is the highest earning footballer on the squad earning £200,000 a week, meaning it would take him just six weeks to earn the equivalent of his share of the £28 million winning prize fund.

Similarly, Raheem Sterling earns £175,000 a week meaning that it would take the Man City footballer seven weeks to earn his £1.2 million if England were to win the World Cup.

On the other end of the scale, lower paid footballers are potentially set to earn a nice wind fall which would otherwise take them months – or even years – to earn.

Check out the full breakdown of how long it would take the England squad to earn £1.2million prize based on their weekly wage:

Peter Watton spokesperson for OddsMonkey comments: “Along with the glory of winning the World Cup, the 23-man squad could earn a nice £1.2 million windfall from the £28 million prize.

While it may only take Harry Kane 6 weeks to earn his share of the £1.2 million prize, the prize is the ultimate pay day for Pope who would otherwise have to work 82 weeks to earn the same amount!”

PrevWill it be a bitter exit for Alan Sugar?
7 betting apps that will make your life easierNext

How much money do you need to start matched betting?

There’s no definitive answer to the question ‘how much money do you need to start matched betting?’ Instead, it’s about how much you personally can