“I used my side hustle to coach my boss.” 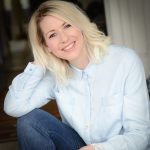 During her time working as a supply chain director at a pharmaceutical company, Rebecca took on some executive coaching training and had her ‘lightbulb moment’ when saw just how powerful coaching could be. She realised what she wanted to do with her life and put it into practice by coaching as many people as she could at work, including her boss.

Her passion for coaching is what made Rebecca believe she could make it into a success. She had already spent 15 years doing a job she didn’t really enjoy, was promoted to director level before she was 30 years old and had won several awards. Imagine what she could accomplish if she was doing a job she loved!

Combining business with being a mum

There were two main reasons Rebecca decided to transition her side hustle into her main source of income:

She gave a year’s notice on her job to give her time to save money. But four weeks after she resigned, Rebecca found out she was pregnant! She ended up combining the business start-up with being a mum.

The challenges of walking away

Rebecca gave up a six-figure salary, bonuses, benefits (such as a company car, pension, and healthcare) to pursue her side hustle. Her parents didn’t understand, but she knew it was what she wanted to do.

“I didn’t think I’d made the wrong decision but I certainly underestimated how hard it would be.”

Rebecca felt betrayed by her old company, who made it very easy for her to leave and promised that they would be her first client. However, when it came to the pitch, “they pretty much slammed the door in my face.”

But Rebecca quickly discovered that there’s no time to dwell on things when you’re running your own business, and that everything that happens is a lesson learnt.

Embracing her new life as a mum and a coach

Rebecca found it difficult to spend any money on herself because she felt as though she should be investing it all back into the business. Having always been an independent person financially, she really struggled with the concept of having to depend on her husband.

By taking on her side hustle as her main source of income, Rebecca had to learn things from scratch and get to grips with running her own business, alongside studying for her post-grad diploma in executive coaching.

Becoming a mother gave Rebecca another reason to love her side hustle – she wanted to help other women succeed in amazing careers alongside motherhood.

Maintaining the balance between being a mum and working is often seen as an uphill battle, but Rebecca wanted to show that, as long as you love the job you’re doing and it’s for a good employer, it is possible.

“There are compromises, but it’s possible to feel good about those. I want to be there for my little boy and for him to see mummy working as a good, positive thing. I want to feel as though I’m doing something worthwhile – I hated the greed and abject commerciality of working in consumer goods.”

My job is fulfilling

Financially, Rebecca feels less secure as she is earning less than she used to at this start up stage but she takes great fulfilment in seeing her clients achieve their dream jobs.

She has a lot more flexibility, which helps reduce her stress levels. Now she can do things like spend time with her little boy and see friends and family when she wants to. However, she finds it hard to fully switch off and sometimes ends up working on the weekends and whilst on holiday.

Despite the challenges and the pay cut, Rebecca said she felt relief within minutes of leaving a job she disliked to take on a career doing something she loved. It was a huge weight lifted off her shoulders.

As much as she enjoys her job now, Rebecca advises people who are thinking of pursuing their side hustle not to do it lightly. She suggests to do it as much as you can alongside your full-time job to build up the business while still gaining a secure income.

She says you need to be ready to reinvent over and over again, learn about social media and hire slowly – don’t invest in more staff until you are completely sure you can afford it and need it.

4 easy side hustles you can make a start on today

5 legal things you need to know about second income tax