“I wanted to be in control of my own time” 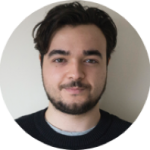 While studying history at the University of Sheffield, Zack decided he’d like some extra cash. He wanted to earn money by doing something he enjoyed, so he began blogging on a freelance basis. When it came to the end of his studies, he did what most students do and started looking for a full-time job.

He began working at a digital agency, but it was worlds away from what he initially thought it would be. Zack decided to take a leap of faith into the life of a freelancer and quit his job. Within a day of leaving he had work set up.

“I wanted to be in control of my own time. I don’t believe that a flat out 9-5 grind is healthy.”

To begin with, money was an issue. Luckily his friends and family were fully supportive, as they could see how much happier he was working on a freelance projects.

Despite there being some low points, Zack is sure he made the right decision.

“I’ve never had any regrets. Things have gone wrong, but I wouldn’t change them as I learnt lessons from them. I got through them by breaking them down into more manageable chunks. I found that if you keep chipping away at the smaller tasks, the daunting unmanageable issue is eventually conquered.”

To begin with, Zack didn’t have any financial help to make the transition, and so he had to put in extra effort to make his money stretch that little bit further. But his determination paid off.

Over time, he has built up a network of contacts in similar situations who he can turn to for guidance and knowledge.

Is the grass greener?

Overall, Zack is earning more, but work differs month on month. He could earn more one month than he does another, and so he can’t always guarantee an exact wage. But, in his words, he is ‘10000% happier’.

Sometimes he can get stressed due to the added pressure, but, in general, he is happier, more productive, and has learnt a lot since making the leap.

Financially, it took Zack 4 months to build up enough business to put him in a better situation than when he was working full time. But emotionally, the pay-off was instantaneous – a weight was lifted off is shoulders the day he left the office.

There’s no doubt it’s a lot of work. His day usual day includes lots of emails, calls, tweets, and typing to no end. Zack does more work now, but because he does it on his terms he can pick and choose what projects he gets involved in and when he wants time off.

What have you got to lose?

“What piece of advice would you give to those who want to start their side hustle full time?”

“Do it. My side hustle required no money or investment – I could just go and test the waters. If you don’t have to put a lot of money behind your idea, the worst thing that you’re going to lose out on is time. What’s going to impact you more: losing out on some hours because something didn’t take off, or spending your days wondering what could have been?”

Despite his side hustle not requiring any investment, he would still advise that people who want to take the leap have a bit of money saved up for themselves, so they don’t have to scrimp and don’t have to add to the stress.

“A side hustle isn’t ready to become a main source of income if it’s not going to pay the bills.”

Pros and Cons from Zack

Zack: “I wanted to be in control of my own time.”

5 legal things you need to know about second income tax

Rebecca: “I used my side hustle to coach my boss.”