The Grand National at Aintree Racecourse in Liverpool is one of the greatest horse racing events in the world – an estimated 600 million people are expected to tune in to this year’s big competition. It’s also one of the most valuable races, with a prize fund of £1 million up for grabs.

This year, the Grand National takes place on Saturday 14 April at 5:15pm.

Bookmakers predict that £250 million will be spent betting on the race in 2018 – so who should you be putting your faith in this year?

Since the legendary Red Rum took home his third Grand National victory in 1977, a different horse has won each year, suggesting it really could be anyone’s race. Previous winners include One for Arthur (2017), Rule the World (2016), and Many Clouds (2015).

Who won the Grand National last year and previous? 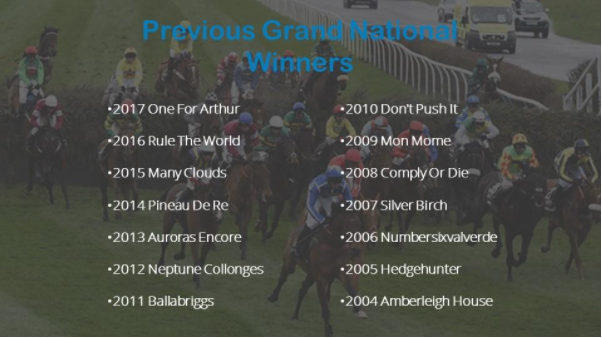 Whether you’re one to study the odds meticulously or simply place your bets based on the horse names you like the sound of, we at OddsMonkey have put together 15 facts you probably didn’t know about the Grand National to help you get into the racing spirit:

The Grand National in Numbers:

If your enquiry is time-critical, please write ‘URGENT’ in your email subject line. If you would like a callback, please remember to include your telephone number.