We go into the 2020 Cheltenham Festival looking at the Bankers of the meeting again, and who – if any – will bring home the money.

Any horse odds-on in the betting is considered a ‘Banker’ but thay does not always mean a winner will come. 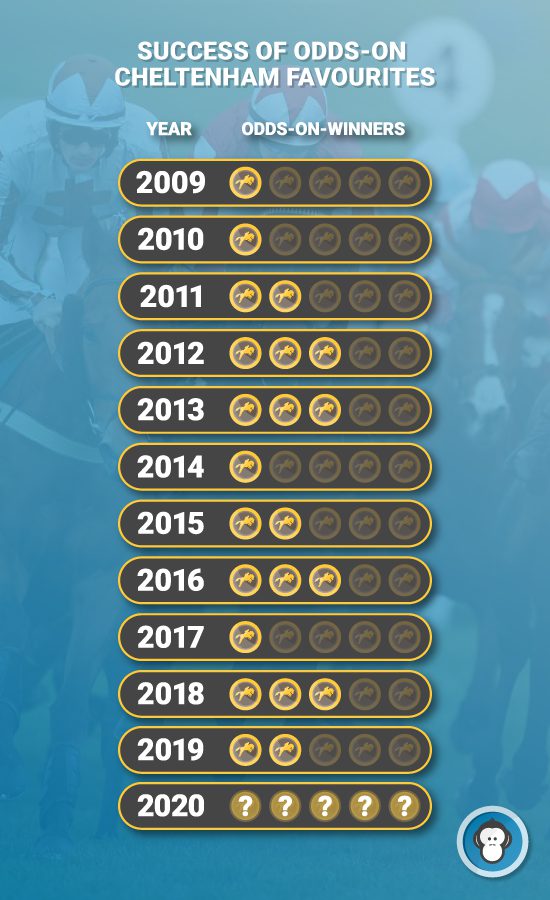 Heading to Prestbury Park, we currently have three horses that are odds on for the Festival, although others may get shorter just before the off with another three approaching odds-on value.

Tiger Roll is one of the those who is odds-on again in the Cross Country, whilst Paisley Park is being backed to make it back-to-back wins in the Stayers Hurdle. Big Irish hope Bennie Des Dieux is the other current odds-on favourite in the Mares Hurdle.

We could also have Envoi Allen, Defi Du Seuil and Appreciate It going off odds-on.

So if we look back over the last ten years, starting in 2009 and of the three odds-on chances, only the legendary Master Minded won. 2010 and the results were not much no better for the fancied runners, with again just one winner in the shape of Cheltenham veteran Big Bucks. Big Bucks repeated that success 12-months later in 2011 as he along with the brilliant Quevega again tasted glory.

2017 and it was something of a graveyard for the big names with only Altior delivering, but 2018 saw more success with Altior winning again and also Buveur D’Air and Samcro coming in.

Last year we had two winners at odds-on with and both were big names. Altior delivered the goods again in the Champion Chase and Tiger Roll – the Grand National hero, come home in the Cross Country.

Indeed looking ahead to 2020 and Tiger Roll is one of the those who is odds-on again in the Cross Country, whilst Paisley Park is being backed to make it back-to-back wins in the Stayers Hurdle. Big Irish hope Bennie Des Dieux is the other current odds-on favourite in the Mares Hurdle.

OddsMonkey spokesman Peter Watton commented: “Last year was a pretty good year for Bookmakers at Cheltenham with only two-odds on favourites coming home in the shape of racing royalty with Altior and Tiger Roll both winning again.

“We have three at the moment for 2020 but could end up with six, so it will be interesting to see how many win the chase up the hill at Prestbury Park.”

Odds and stats accurate at time of writing

PrevDancing On Ice Finale – can anyone stop Perri?
Cheltenham Facts – all you need to knowNext