During the European football season, many of the continent’s biggest clubs take part in the UEFA Europa League. Though less prestigious in comparison to its sister competition the Champion’s League, the Europa League is still very competitive and attracts many quality teams with squads full of world-class players. And, when the cup reaches its final stages, there are usually some great matches and a lot of drama for football fans to look forward to.

In this guide, we are going to take a look at all the essential details of the UEFA Europa League so that you’re ready to enjoy the 2019 edition. We also have a guide to the Europa League final that’s worth a look before that last fixture comes around.

What is the UEFA Europa League?

The UEFA Europa League (UEL) is a football competition that takes place every year through the European season (August to May). Clubs enter from all over the continent, qualifying based on their domestic league and cup performance, then begin to play each other through qualification rounds, a group stage and, finally, knockout fixtures until a champion is crowned.

The cup is organised by UEFA — the football governing body of Europe — as their tier two competition, ranking below the Champion’s League (UCL) in terms of prestige. It has been running since 1971, though it was known for most of its lifespan known as the UEFA Cup before a 2009 rebrand. It has also grown to absorb the discontinued Cup Winner’s Cup and Intertoto Cup.

How does the UEFA Europa League format work? 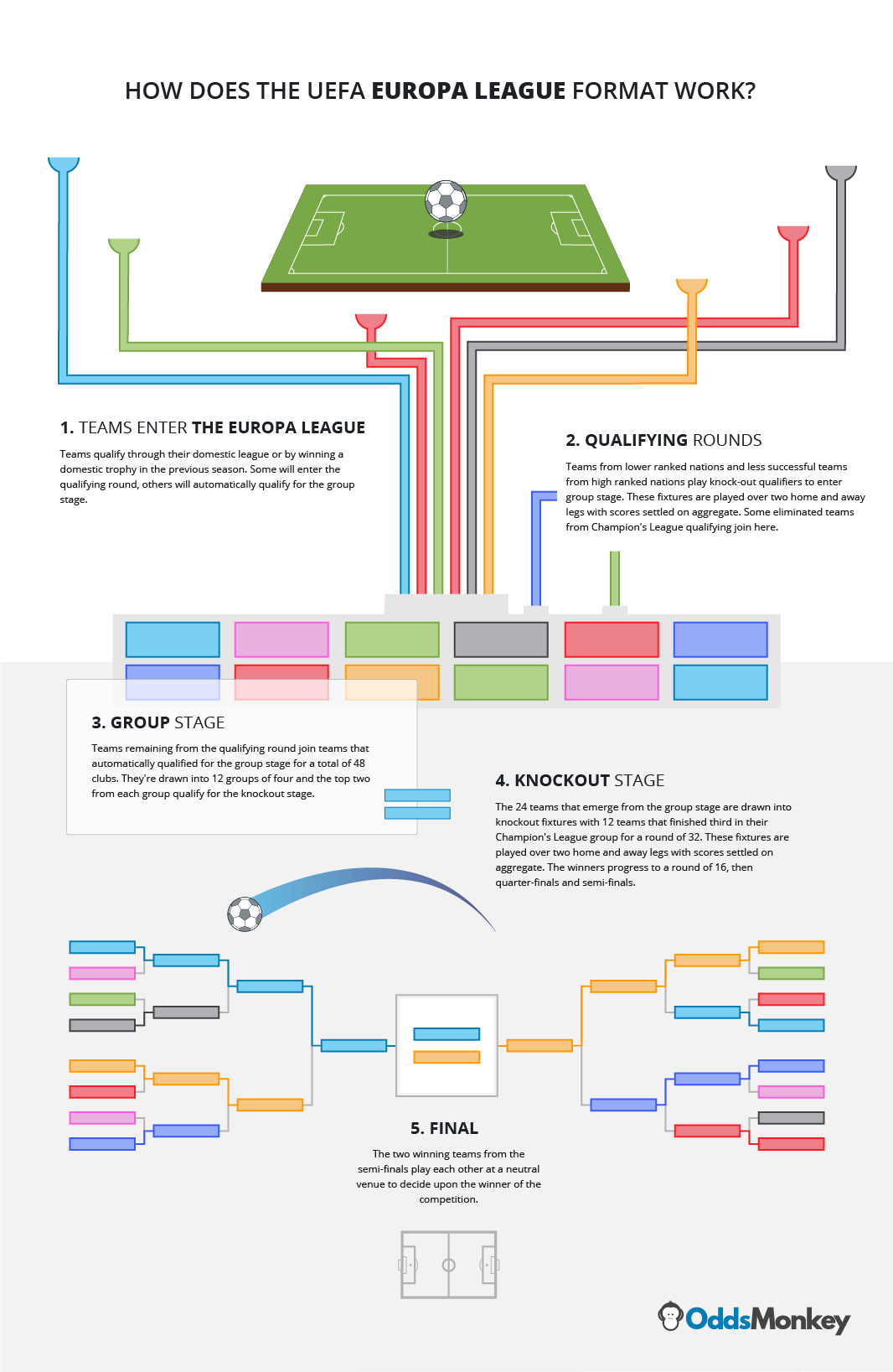 Do away goals count in the Europa League?

Yes, the Europa League uses the “away goals rule” as a tie-break method in the qualifiers and knockout phase where two-legged home and away fixtures take place. The rule is not used in group games, where a draw is acceptable, or the final, where there is just one match.

The rule sees goals scored by a team in the away leg count as double if the aggregate score — the goals from both games added together — is tied. This means that the team that has scored the most away goals will win the tie and progress in the competition. UEFA applies the rule after normal time, but if the scores are still tied, 30 minutes of extra time is played. If there are no away goals scored in extra time and scores remain level, a penalty shootout takes place.

Are there any rewards for winning the UEFA Europa League?

Apart from enjoying the prestige of winning one of Europe’s premier competitions, there are a few added benefits to winning the UEFA Europa League.

There is also a financial benefit for clubs competing, with different amounts of prize money awarded for reaching certain stages. The UEFA Europa League prize money is as follows:

When to start betting on the UEFA Europa League

Usually, you can start your Europa League betting as soon as the teams competing are confirmed at the end of the season in May. The tournament lasts for the whole football season, from the initial qualifying rounds in the summer to the final the following May, so it provides a good source for placing your bets through most of the year.

Many people like to place bets on individual matches on a regular basis, as well as choosing an outright winner of the competition. You may also wish to bet on the outcome of the group stages or whether a team will reach a particular round. It’s worth noting that if you’re looking to place a bet on a certain team you think will win the cup, the earlier you place the bet, the better Europa League odds you’re likely to get.

It’s also worth remembering that teams eliminated from the Champion’s League also enter the cup at certain stages, and that these are likely to be quality sides that could be among the favourites to win. And, because nobody knows who these teams are likely to be until the group stage is over, a big team­ entering at the knockout stage — like Napoli, Valencia, or Internazionale this year ­— could mean that the current favourite has more competition, which could see the odds shift dramatically.

If you’re an OddsMonkey member, you should check out our Europa League threads on our matched betting forum, where the latest and best offers will be listed.

What bets should I place? Are there any UEFA Europa League betting tips?

Now that you’re familiar with the format and know when you can start your UEFA Europa League betting, you’re probably wondering if there are any tips for placing the right bet. Here are a few things to consider if you’re looking to put your money in the smart places:

Looking to bring in some extra cash from your betting on a regular basis? Then it’s worth looking into matched betting, which offers a low-risk method for adding to your income.

As an OddsMonkey member, you can access the latest Europa League betting offers in our matched betting forum, as well as being able to access tools like our Oddsmatcher, Each Way Matcher, and Acca Matcher to assist you in making a profit. Even if you have little knowledge of the Europa League or the teams involved, our matched betting service makes it easy to make money from your bets.

If you’re looking to place bets on the UEFA Europa League throughout the 2018/19 season, then it can help to familiarise yourself with the round schedule to know when the next games are. Below, we’ve created a guide to each round, including dates and details on progression.

The table below shows the distribution of teams for the Europa League format. This year, a new “champion’s path” was created in the qualifying rounds for domestic champions eliminated from the UCL, ensuring that these champions compete against one another for a place in the group stage.

Also, where there is a reference to “association xx” this refers to UEFA’s country coefficients, which rank football associations’ success and are used to determine when teams from that country enter the Europa League. Generally, the higher the ranking, the later the teams enter the tournament.

When is the Europa League preliminary round draw? Early June

When do the fixtures take place? Late June/early July

How it works: There are eight two-legged fixtures played between cup winners, runners up, and third-placed teams from the lower ranked associations. The winners move onto the first qualifying round and the losers are eliminated from the competition.

When is the Europa League first qualifying round draw? Mid-June

When do the fixtures take place? Mid-July

How it works: There are 47 two-legged fixtures played between cup winners, league runners up, and league third-placed teams from a mix of lower and mid-ranked associations, as well as the winners from the preliminary round. The winners move onto the second qualifying round and the losers are eliminated from the tournament.

When is the Europa League second qualifying round draw? Mid-June

When do the fixtures take place? Late July/Early August

When qualification reaches this point, it splits into two separate paths: the champion’s path for eliminated UCL domestic champions and the main path for everyone else.

How it works: There are 37 two-legged fixtures played between cup winners, league runners up, third-, fourth-, fifth-, and sixth-place teams from a mix of low-, mid-, and high-ranked associations, as well as the winners from the first qualifying round. The winners move onto the third qualifying round main path and the losers are eliminated from the tournament.

When is the Europa League third qualifying round draw? Mid-July

When do the fixtures take place? Early August

How it works: There are 26 two-legged fixtures played between cup winners, third- and fourth-place teams from mid- and high-ranked associations, as well as some teams eliminated from the UCL second qualifying round main path. There are also the 37 teams who progressed from the UEL second qualifying round main path. The winners move onto the main path play-offs and the losers are eliminated from the tournament.

When is the Europa League play-off round draw? Early-August

When do the fixtures take place? Mid/late August

How it works: There are 13 two-legged fixtures played between the winners of the third qualifying round main path. The winners qualify for the group stage and the losers are eliminated from the tournament.

When is the Europa League group stage draw? Late August

When do the fixtures take place? September–December

How it works: There are 12 groups (A–L) of four teams drawn from a pool containing the winners of the main and champion’s path play-offs, as well as cup winners, fourth-, and fifth-place teams from higher ranked associations who automatically qualify for the group. They are also joined by teams eliminated from the UCL third-round main path and play-offs.

Teams play each other twice — home and away — with the top two in the group qualifying for the knockout phase. Teams tied on points are ranked by goal difference (goals for less goals against).

When is the Europa League knockout stage draw?

When do the fixtures take place?

How it works: The 24 teams that qualified from the group stage are joined by 8 teams that finished third in the UCL group stage for a round of 32, with knockout fixtures played over home and away legs. A round of 16 is drawn from the winners of the previous round and played over two legs.

When the competition reaches the final eight teams, a draw takes place to determine both the quarter final and semi-final fixtures. From this point, a team can see who they may have to play before reaching the final. Ties are again played over two home and away legs.

When is the Europa League final? May

How it works: After the semi-finals, there are two remaining teams who play each other in the final. It takes place in a neutral venue over one match. Extra time and penalties are used if the teams are drawing at the end of normal time. Take a look at our UEFA Europa League final 2019 guide for a more in-depth look at the final and handy betting advice.

We hope you found the advice and information in this guide useful. Hopefully you’ll know the ins and outs of the UEFA Europa League, as well as how best to place your bets on the competition.

Remember, the best way to earn cash from Europa League betting is through matched betting, a method that we here at OddsMonkey make very easy. Simply become a member to access a bunch of great features and support.