The curse of the Strictly favourites…they don’t win!

Strictly Come Dancing is back this weekend, but can you look back previous winners for tips on who might claim the Glitter Ball Trophy this year?

Well, the short answer is no – indeed if you start the show as favourite, the odds are massively against you winning the show – less than 20% of favourites have won the show in its 16-year history.

Since the first show back in 2003, just three favourites have taken the honours, and they have all been female – Natasha Kaplinsky, Alesha Dixon and Kara Tointon.

Series 1 – 2003 – Newsreader Kaplinsky took the honours with Brendan Cole – who himself would go on to become one of the most famed professional dancers, but she was tipped from the start to do well and remember there was just eight couples in the first series.

Series 3 – 2005 – The first sportsman to take the honours was cricketing legend Darren Gough, who caused a real shock with his win alongside Lilia Kopylova. He held off long-time favourite Zoe Ball and athlete Colin Jackson.

Series 5 – 2007 – The favourite comes in for only the second time, with Alesha Dixon claiming the title with her partner Matthew Cutler, fending off Gethin Jones and Matt Di Angelo – although the early withdrawal of Kelly Brook also helped.

Series 6 – 2008 – Actor Tom Chambers ended up being a hugely popular winner with Camilla Dallerup after a brilliant last dance, but he was far from the favourite with Rachel Stevens and Lisa Snowdon the favoured celebrities along with Rugby star Austin Healey. 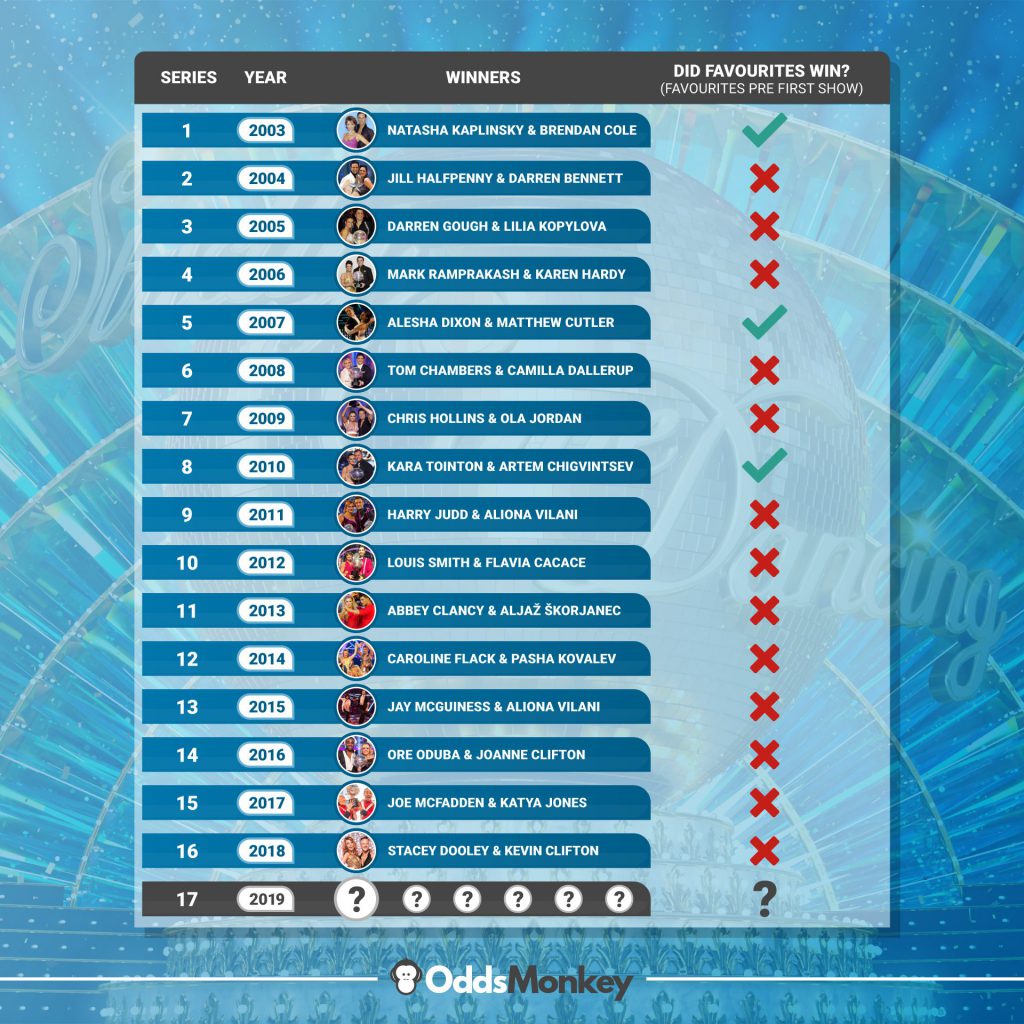 Series 7 – 2009 – Another huge shock came in 2009 with sports reporter Chris Hollins providing a big upset in the final, when he and Ola Jordan took victory over favoured former Hollyoaks duo of Ali Bastian and Ricky Whittle.

Series 8 – 2010 – A close call in 2010 but favourite Kara Tointon brought it home. Having already showed his prowess in winning a Sports Relief special in 2008, should secured victory with Artem Chigvintsev, seeing off Matt Baker in the final.

Series 9 – 2011 – Victors Harry Judd and Aliona Vilani were hugely popular, but the McFly drummer was not seen as one of the favourites before the series with the likes of Holly Valance, Jason Donovan and Chelsee Healey attracting the headlines – but it was Judd who came through the pack to win.

Series 10 – 2012 – The fist sportsman to take the honours since 2006, gymnast Louis Smith won with Flavia Cacace but pre-show all the talk had been about former Westlife singer Nicky Byrne and Girls Aloud star Kimberley Walsh.

Series 11 – 2013 – Model Abbey Clancy was far from favourite at the start but she claimed the Glitter Ball with Aljaz Skorjanec. Singer Sophie Ellis-Bextor, who had been considered favourite early on failed to make the final as news anchor Susanna Reid claimed the runner-up spot.

Seires 12 – 2014 – Caroline Flack took the win with the popular Pasha Kovalev, but she was never considered one of the favourites as she fended off popstars Frankie Bridge, Simon Webbe and Pixie Lott to take the crown.

Series 13 – 2015 – Wanted star Jay McGuiness too the win with Aliona Vilani, but it was another pop star who was tipped for the win in the shape of Peter Andre, however the Australian didn’t even make the final. McGuiness beat soap actresses Kellie Bright and Georgia May Foote in the finale.

Series 14 – 2016 – The biggest shock in Strictly history came in 2016. Early favourite Will Young withdrew, but then going into the final – it was seen as a battle between Danny Mac and Louise Redknapp, but no it went to presenter Ore Oduba who took the win with Joanne Clifton despite being a huge outsider of the three.

Series 15 – 2017 – And another favourite fails…and it was another big shock. JLS’ Aston Merrygold and Alexandra Burke were expected to push for the title, but the challenge did not come and in the end former Hollyoaks star Gemma Atkinson was pipped at the post by Casualty actor Joe McFadden.

Series 16 – 2018 – Once again there was no joy for the pre-show favourites, after impressing in the launch show DJ Vick Hope overtook Pussycat Doll Ashley Roberts in the betting, but in the end nether prevailed as Stacey Dooley took the win with her partner Kevin Clifton – who finally got his hands on the Glitter Ball trophy after a number of near misses.

Series 17 – 2019 – Favourite going into the show this year is Karim Zeroual, who will be dancing with Amy Dowden.

OddsMonkey spokesman Peter Watton commented: “It is nearly a decade since the pre-show favourite has now taken the honours in Strictly Come Dancing when Kara Tointon taking the title dancing with Artem Chigvintsev.

“There have been a lot of near misses along the way but now the pressure is on children’s TV presenter Karim Zeroual, as he has been made favourite. He also has the extra burden knowing no man who has been favourite has ever gone on to win the show.

“However, the three soap stars Emma Barton, Catherine Tyldesley and Kelvin Fletcher – who hail from the three big hitters Coronation Street, Eastenders and Emmerdale – have been attracting a lot of interest.”

OddsMonkey are the leading Odds Experts, and specialise in analysing odds and betting markets.