That’s it, England boss Gareth Southgate has had his last look at his players before selecting his World Cup squad, and despite the fact he does not yet know…the Bookmakers believe they do.

Southgate will reveal his 23-man party in May, but Markets on who is going are open and the Bookies firmly believe they have a grip on who will be on the plane….and who won’t.

Looking at each category and the three goalkeepers are largely as many expect with Jordan Pickford the favourite to land the number one role ahead of Jack Butland and former first choice Joe Hart.

In defence and Harry Maguire has been one of the ‘certainties’ to make the final cut along with Liverpool’s Joe Gomez, which is where you see some big casualties could come with Chelsea’s Gary Cahill and Manchester United duo Phil Jones and Chris Smalling tipped to miss out.

Turning to midfield, and there are not too many surprises with players such as Jake Livermore and Harry Winks looking unlikely to be on the plane with Arsenal’s Jack Wilshere getting in.

In in attack, and again not many shocks with Danny Welbeck currently expected to make the cut, meaning no role for Theo Walcott. 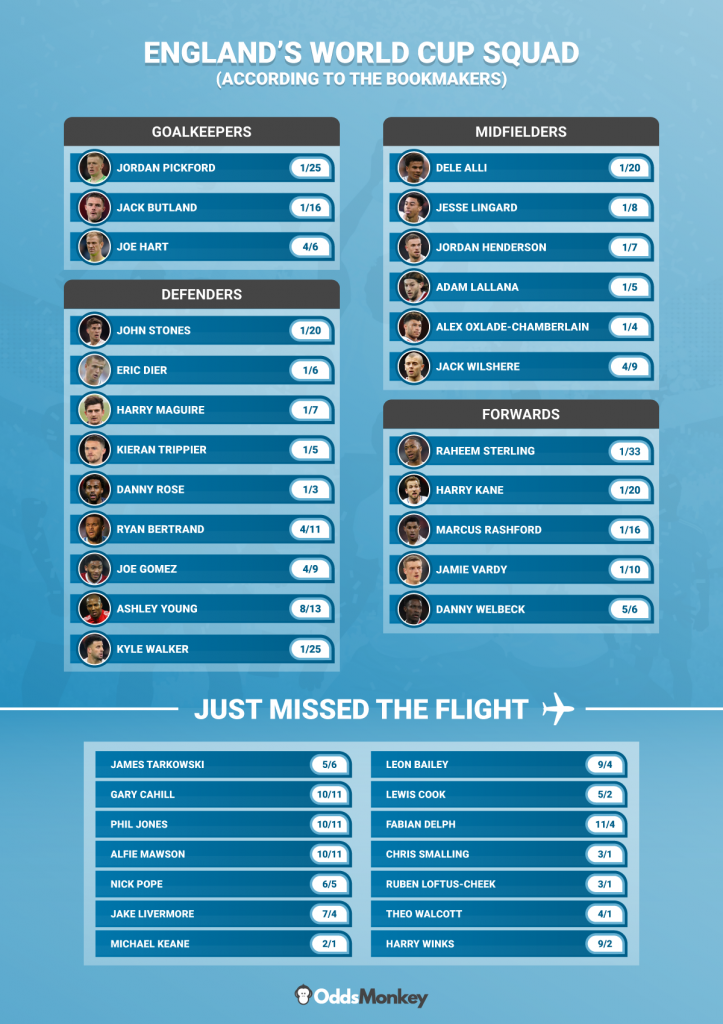 OddsMonkey believe there could be some very good value in those players who have not made the squad.

“There may be some big name casualties here, just a few months ago the likes of Gary Cahill, a former captain, Phil Jones and Chris Smalling – who represent over 100 caps between them – would have been nailed on to make it,” explained Peter Watton.

“However, the Bookmakers think they are going to miss out at this point, but we are not sure – especially Cahill and Jones, they are both around 10/11 and they could both very well make the final cut.

“Elsewhere, those making it are the likes of Arsenal duo Wilshere and Welbeck – although with their injury records, they may yet have a battle on their hands.

“Of the others who are predicted not to go at this stage, we think the likes of Ruben Loftus-Cheek at 3/1 and Harry Winks at 9/2 – if they can produce a good few games in the Premier League run-in, then they could easily make the squad.”