Southampton fans received the worst value, paying £27.05 per goal, while Man City fans paid just £4.90 per goal – find out which team offered the best value for money this season

Sunday marked the end of the Premier League season, and OddsMonkey has analysed each of the 20 clubs’ performance to determine which team offered the best value of money to their season ticket holders.

We conducted an analysis of each club’s total number of home goals and compared it to the price of a season ticket to calculate which offers the best value for money. How much did fans have to pay per goal to follow their favourite team throughout the season?

Following a spectacular performance this season, breaking records including consecutive Premier League wins, most goals scored, and games to play with the title won, Man City have achieved another accolade – offering their season ticket holders the best value for money. 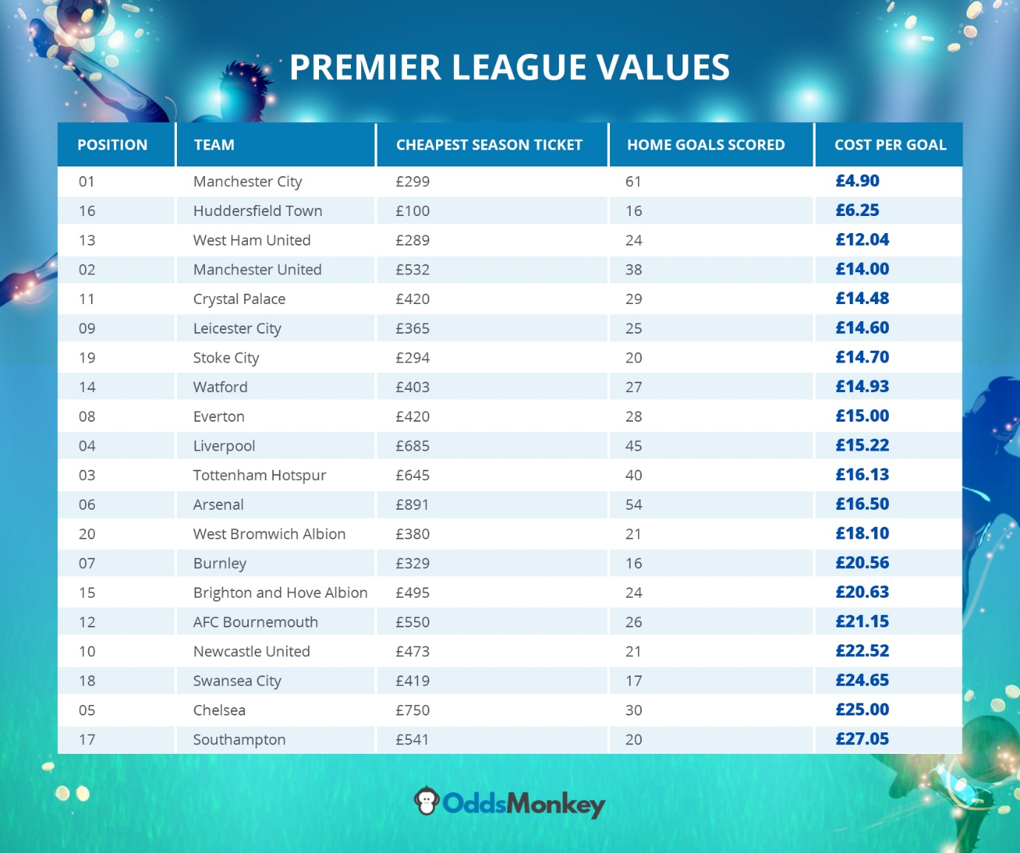 Man City charges fans £299 for a season ticket, and the 61 home goals scored this season means that it cost season ticket holders only £4.90 to see the Premier League winners score at home – the best value for money in the League.

Huddersfield Town and West Ham were also among the best clubs for offering their fans good value for money – costing season ticket holders £6.25 and £12.04, respectively, per goal.

OddsMonkey also looked at which of the Premier League stadiums offered their loyal season ticket holders the best deals for a pie and a pint.

They may have finished 13th this season, but Burnley is top of the league for offering their fans a pie and pint. Burnley’s Turf Moor stadium charged £3 for a pie and £3.20 for a pint, totalling to a respectable £6.20.

After forking out £645 for a season ticket, Spurs fans may find themselves further strapped for cash on match day. Wembley Stadium, where Tottenham played their home matches this season, charges the most for football fans who want to enjoy a drink and something to eat – it costs £4.30 each for a pie and a pint, totalling to a whopping £8.60.

“We feel both pieces of analysis are fascinating and provide some real insight into what football fans in the top-flight get in return for their hard earned cash,” said OddsMonkey spokesman Peter Watton.

“In terms of value for season ticket holders, it was not hard to predict champions Manchester City finishing on top given their free flowing football and success, but to see Huddersfield in second we thought was fascinating, the only other team offering value of under a tenner.

“And if you look at our “Pie and Pint” research Huddersfield were fourth – so what a time to be a Terriers fan, they stay up, they offer great value and it is one of the cheapest places to get your Pie and Pint.

“In terms of value, maybe it is a bit surprising that of the three lowest teams, we only had one of the relegation sides in the shape of Swansea – with the other two places filed by Chelsea and Southampton – although it is fair to say they both disappointed so probably not a shock they failed to serve up value for their fans.”