Who tops the Premier League for the cheapest pie and pint?

The BBC have released their annual Price Of Football 2017 report which looks at the cost of following your club and how deep in your pockets you may have to dig being a fan this year.

From season tickets to programmes, the BBC report reveals everything you need to know about the cost of supporting your team. However, there is one piece of data that we all really care about, and that is how much a pie and pint is going to cost us at each stadium.

So, we at OddsMonkey have analysed the data from the BBC and used our own research to find out who tops the premier league table for the cheapest pie and pint.

Burnley top the league for the cheapest pie and pint 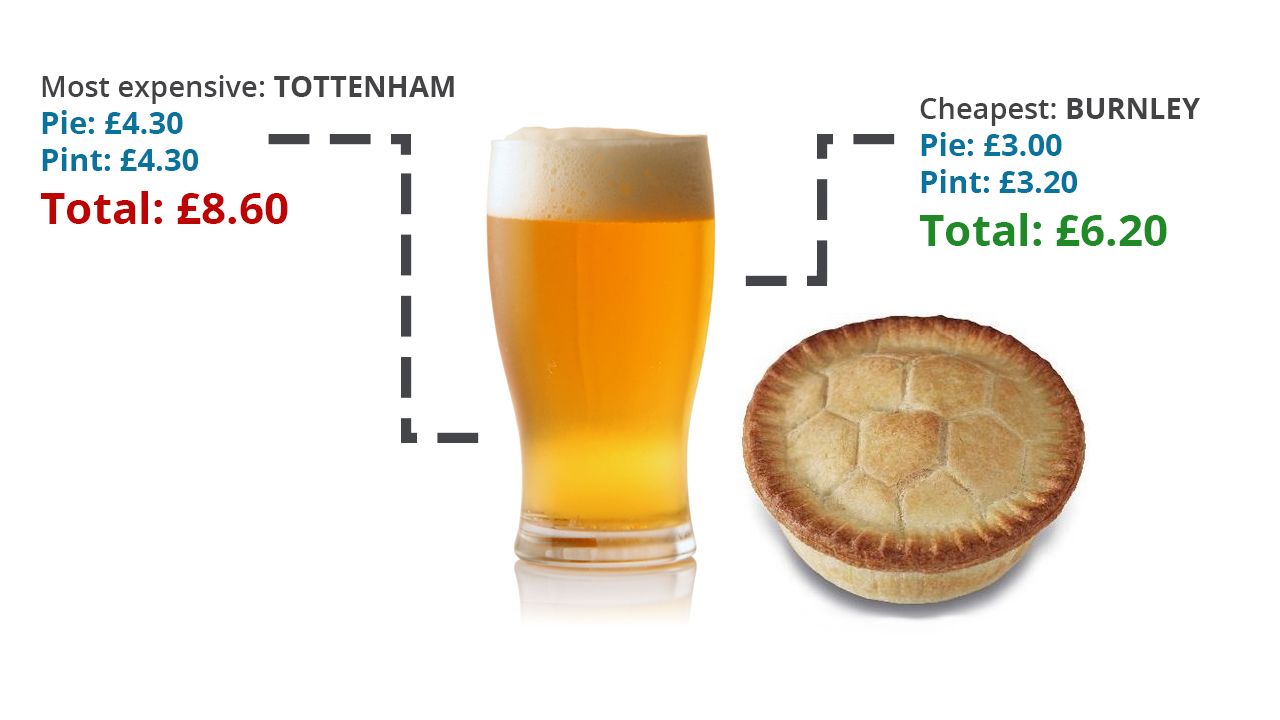 The latest 2017 data reveals that Burnley are the true champions when it comes to offering the cheapest pie and pint. Not only do they sell pies at the lowest price of £3.00, but also charge just £3.20 for a pint, costing fans £6.20 in total.

Tottenham is at the bottom of the league, shocking their fans with a costly price of £8.60 for a pie and a pint. That’s a huge £2.40 more than Burnley just to be a Tottenham fan and enjoy something to eat and drink while watching the match.

Chelsea, however, charge their fans the most for a pint at their stadium, with prices set at a whopping £4.80.

How much does your team charge? Take a look at the table below to see where your team sits in the pie and pint league.

The BBC’s Price of Football report reveals that West Ham has the cheapest season ticket price this year at just £289, whereas a season ticket to watch Arsenal play could set you back £891.

Peter Watton at OddsMonkey says: “Man City might currently be at the top of the table when it comes to the most points this season but Burnley sit at the top for their cheapest pie and pint price.

“It’s also interesting to see that Arsenal have once again come out top of the BBC’s report on the most expensive season tickets. What’s not always clear, though, is that Arsenal include the cost of the first 7 FA Cup and European games in their season ticket price. So, the cheapest Arsenal ticket is actually for 19 home league games and 7 cup/euro games, which makes the price per game £34.27 which is actually cheaper than a Liverpool home season ticket which work out to be just over £36.

“Another interesting point to note is that this is the first year that Arsenal’s season ticket prices have reduced. But don’t get too excited Arsenal fans, we understand that this is purely due to the fact that they did not qualify for the Champions’ League and the only likely scenario that the tickets would reduce again is if they didn’t qualify for even the Europa league next season.”

PrevCould Zlat be back?
7 of the best matched betting blogs to subscribe toNext